The aging of man is a realty with no fountain of youth available; with the process of growing older and showing effects of increase of age, with progressive changes that lead to decline of functions identified in God's Word.

Growing old is not nice but it is interesting (August Strindberg).  When you are young, you have not the experience; when you are old you have not the strength (Author Unknown).  An inherent kindness exists in the process of aging; we are allowed to move along gradually (Robert James Waller).

Aging of Man
Strength of Youth

The Book of Ecclesiastes reveals the aging of man; along with instruction to utilize the strength of one's youth before that process begins.  It reveals:  Remember now your Creator in the days of your youth, while (before) the evil days come, nor the years draw nigh (near), when you shall say, I have no pleasure in them (referring to the traits of old age) (Ecclesiastes 12:1).

There is a tendency in the modern day culture to push aside the necessity of spiritual growth and service to the Lord.  There are many distractions that are as bright lights but are not suited towards one's spiritual being.

Plus Side of Youth

It was noted that before the aging of man begins, the natural abatement of one's strength, one should remember the plus side of one's youth.  It is this period of time that one is in their prime time, when one's body is strong and vigorous, senses are quick, the faculties of the soul capable of being improved and enlarged.

The youth of the land is to keep in remembrance there is a Creator, who is gracious, merciful, that will pardon iniquity, transgression, and sin. Who created man out of the dust of the earth; of which man will one day return, but His spirit will return to God for judgment:  The Judgment Seat of Christ for believers and the Great White Throne Judgment for unbelievers.

Scripture reveals: But now being made free from sin, and become servants to God, you have your fruit unto holiness, and the end everlasting life.  For the wages of sin is death; but the gift of God is eternal life through Jesus Christ our Lord (Romans 6:22-23).  Servitude to the Lord is extremely important to young and old alike but especially to the young while they have the vitality of their youth! 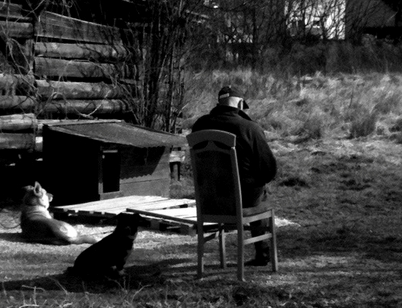 The aging of man is very descriptive in the Word of God; and its process, with those who have already attaining such a status being well aware of its influence.  In identifying these traits I will utilize some of the descriptive narratives of a Bible commentary.

While the sun, or the light, or the moon, or the stars, be not darkened, nor the clouds return after the rain (Ecclesiastes 12:2).  The gradual darkening of the heavenly bodies represents declining vitality, and the approaching clouds represent the storms of old age, troubles that attend it, and that which was once fixed in one's memory being greatly impaired or loss in the aging of man.

Succumbing to the
Aging Process

There are a few exceptions; as some hold up fairly well in the aging process; but eventually, if life prevails long enough, one succumbs to the process.  Thankfully, we have modern day technically that dwarfs some of these features for a while, but nothing can counter the original God-given features of man!

And the doors shall be shut in the streets, when the sound of the grinding is low, and he shall rise up at the voice of the bird, and all the daughters of music shall be brought low (Ecclesiastes 12:4).

Growing old is compared to the decline of a great estate.  This verse is expressive of the weakness which the aging of man brings on.  There are a few instances to the contrary; such as Caleb, who at 85 was as strong as at 40; and Moses whose natural force abated not at 120 years of age.

However, these were God-given exceptions do not fit into the normal pattern of the aging of man which everyone will experience; if given longevity of life.  Again, this verse points towards the first verse which stresses the importance of using one's youth and vitality at a young age, to serve the Lord, being more beneficial in youth than old age.

Halting Gait of
the Elderly

When they shall be afraid of that which is high, and fears (terrors) shall be in the way, and the almond tree shall flourish (blossom), and the grasshopper shall be a burden, and desire shall fail: because man goes to his long (eternal) home, and the mourners go before the streets (Ecclesiastes 12:5).

The almond tree is a reference to the white hair of old age; the crippled grass hopper pictures the halting gait of the elderly; and desire that fails may be loss of sexual desire.  Those who have attained the aged status know these things to be true; realizing more than ever the benefits of an eternal home.

God's Use of the
Aged

God can use the aged of the land as identified in His Word.  In Book of Psalms a prayer is extended towards old age:  Cast me not off in the time of old age; forsake me not when my strength fails (Psalms 71:9).

This person knew the limitations of the aging man but desired to be utilized despite those limitations.  Scripture gives an answer: Those that be planted in the house of the Lord shall flourish in the courts of our God.  They shall bring forth fruit in old age; they shall be fat (plump) and flourishing (green) (Psalm 92:13-14).

Another insight is given in the Book of Proverbs:  The hoary (silvery) head is a crown of glory, if it be found in the way of righteousness (Proverbs 16:31).  God's Word encourages one to serve the Lord in their youth but does not leave out those who have experienced the aging of man.

Preciousness of Life
Cut Off

The silver cord be loosed, or the golden bowl  be broken, or the pitcher be broken (shattered) at the fountain, or the wheel broken at the cistern.  Then shall the dust return to the earth as it was: and the spirit shall return to God who gave it (Ecclesiastes 12:6-7).

Life itself in all its preciousness is cut off.  Death is pictured as the irreversible shattering of a golden bowl when cut from the end of a silver cord and the similar smashing of pitcher or wheel.  The judge of all, who passes sentence, orders those that are saved to eternal bliss and happiness, and the unsaved to eternal Hell and destruction.

Scripture reveals:  He that believes on the Son (the Lord Jesus Christ) has everlasting life: and he that believes not the Son shall not see life; but the wrath of God abides (remains) on him (John 3:36).