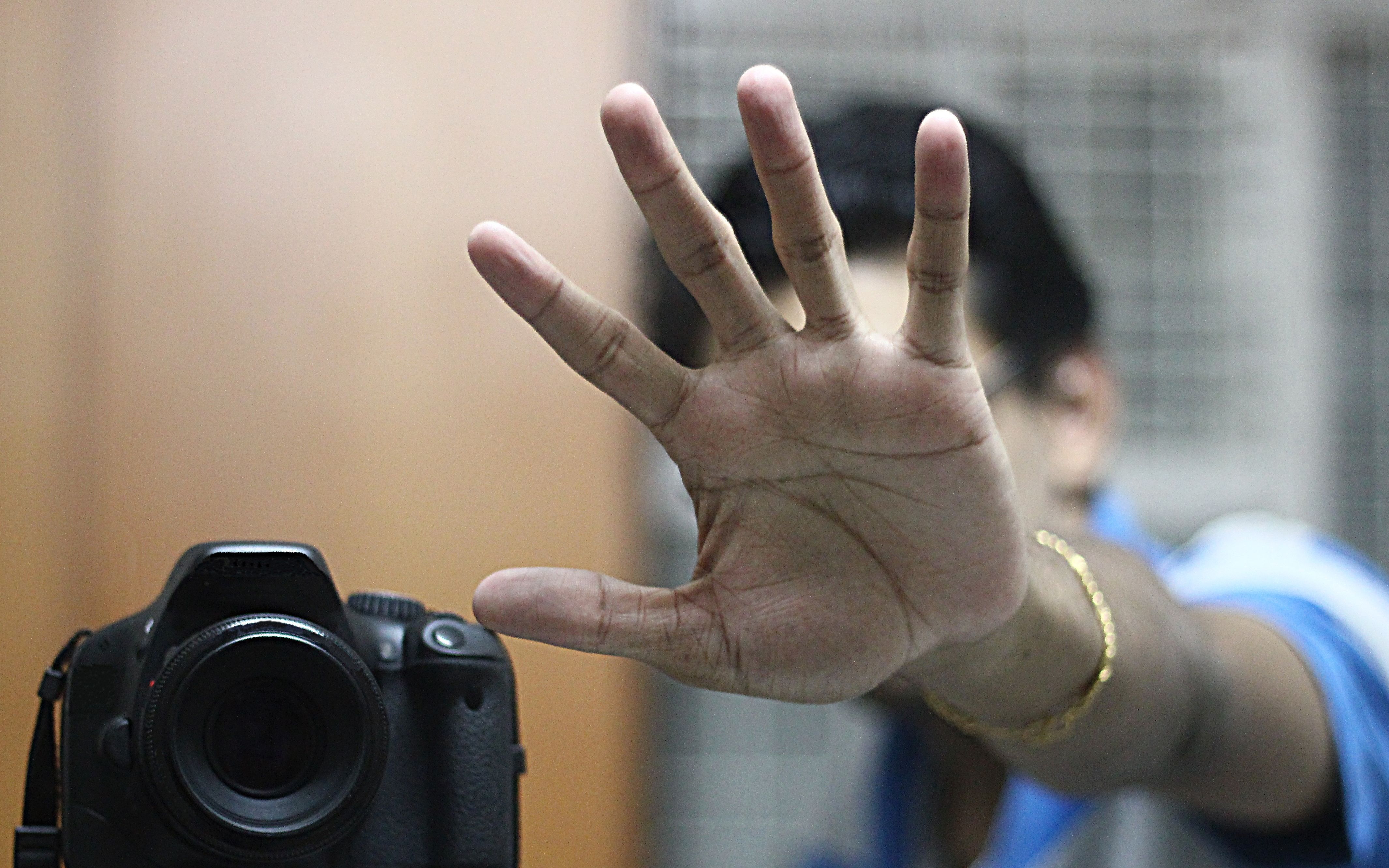 Hiding the truth is an effective way to deceive people into acceptance; an example is using such a means towards promoting Marxism, Socialism, and Communism.

It was noted that a striking expression, with the aid of a small amount of truth, can surmise us into accepting a falsehood (Marquis de Vauvenargues).  It has been increasingly more difficult to seek out the truth; with many attempting to disguise the truth, towards furtherance of one's intended goal.

Hiding the Truth
News Media of a Nation

The term hiding indicates the activity of keeping something secret; to conceal or withdraw from sight; to withhold knowledge rightfully deserved.  Truth is a fact that has been verified, free from falsehood, revealing the real state of things, not intermingling half-truths to support desired results.

When the news media of a nation is suppressed; or influenced to produce a certain flow of information, it enters into a hiding the truth category; that can usher a nation into captivity rather than freedom.

It was noted that if truth is not diffused (promulgated), error will be.  If the power of the Gospel is not felt throughout the length and breadth of the land, anarchy and misrule, degradation and misery, corruption and darkness will reign without mitigation or end (Daniel Webster).  If the fires of freedom and civil liberties burn low in other lands, they must be made brighter in our own.

If in other lands, the press and books and literature of all kinds are censored, we must redouble our effort to keep them free.  If in other lands the eternal truths of the past are threatened by intolerance, we must provide a safe place for their continuation (Franklin D. Roosevelt).  Voices of the past recognize what hiding the truth will entail and are sounding the alarm to prevent its occurrence.

Scripture reveals: We have renounced the hidden things of dishonesty (hiding the truth), not walking in craftiness, nor handling the word of God deceitfully; but by manifestation of the truth commending ourselves to every man's conscience in the sight of God (2 Corinthians 4:2).

It was noted that the Apostle Paul was highlighting the differences between the conduct of the first ministers of the Gospel, and the different behavior of others who had come on the scene.  The first ministers used no deception (hiding the truth) to cover their doctrines, nor hid their conversations; whereas others took a great deal of pain to color over both their sentiments and their lives.

The first ministers did not seek to please men, to gain applause from them, to make merchandise of them; nor to change the Scriptures to cover any carnal or worldly purpose.  They with all plainness preached the truth, doing so in the sight and presence of God, to whom they knew they must give an account of their ministering to others.

The prophet Zechariah, in speaking the words of the Lord, said: These are the things that you shall do: Speak you every man the truth to his neighbor; execute the judgment of (for) truth and peace in your gates. And let none of you image (think) evil in your hearts against his neighbor; and love no false oath: for all these things that I hate, saith the Lord (Zechariah 8:16-17).

It was noted that the duties to be performed was to glorify God; not using deceit or lying (hiding the truth), but to speak, publish, and declare the truth towards the edification of others; doing justice, which would bring peace to all concerned.

Morality of a Nation

Rather than abide by that which has been firmly implanted in the Word of God; man entered into what is warned against in God's Word;  hiding the truth, covering it over with half-truths to identify with a desired lifestyle or fleshly desire.

The morality of a nation dissipates as continued floating of half-truths become increasingly prevalent.  It was noted that such a nation suffers from the corrosive immoral breath of the 21st century.  The secularism, humanism, materialism, liberalism, and commercialism of our day has devastated our resources of security.

Professing Not the
Truth

Changing the Truth
of God

Scripture tells of those who changed (exchanged) the truth of God into a lie and worshiped and served the creature more (rather) than the Creator (God), who is blessed forever. For this cause God gave them up to vile affections: for even their women did change (exchanged) the nature use into (for) that which is against nature.

Likewise the men, leaving the natural use of the woman, burned in their lust one toward another (homosexuality); men with men working that which is unseemly (shameful) and receiving in themselves that recompense (penalty) of their error which was meet (due).  And as they did not like to retain God in their knowledge, God gave them over to a reprobate (debased) mind, to do those things which are not convenient (fitting) (Romans 1:24-28).

Scripture reveals: This is the message which we have heard of him (God), and declare to you, that God is light, and in him is no darkness at all. If we say that we have fellowship with him, and walk in darkness, we lie, and do not (practice) the truth (rather hiding the truth) (1 John 1:5-6).

It was noted that walk in darkness means walking in sin.  This could represent one who claims to be enjoying a close relationship with God but whose life is clearly dominated by sin.  They are acquainted with the truth; yet continue in darkness, preferring and loving it, and the works of it; having pleasure in the ways of sin and wickedness.

Scripture reveals: How do (can) you say, we are wise and the law of the Lord is with us? Lo, certainly in vain made it (hiding the truth); the pen of the scribes in vain.  The wise men are ashamed, they are dismayed and taken: Lo, they have rejected the word of the Lord; and what wisdom is in them (Jeremiah 8:8-9)?

It was noted that Judah's wise men show the shallowness of their misdirected wisdom by rejecting their basic commitment to the Word of the Lord.  The mere handling of God's Word is no guarantee of spiritual fidelity. The Word must master its readers and become part of their lives.

In New Testament times the scribes were condemned by Jesus for partaking of a corrupt society.  Having rejected the Word of the Lord; sent by the prophets; for had it been attended to, would have been profitable to them (and us as well), and the means of making them wise unto salvation.

Deception in the Making

Scripture reveals: Be you doers of the word, and not hearers only, deceiving your own selves. For if any be a hearer of the word, and not a doer, he is like a man beholding (observing) his natural face in a glass (mirror). For he beholds himself, and goes his way, and straightway forgets what manner of man he was.

But whosoever looks into the perfect law of liberty, and continues therein, he being not a forgetful hearer, but a doer of the work, this man shall be blessed in his deed (what he does) (James 1:22-25).  It was noted that one was rebuked for mere listening but not responding, while the other leaves his inner life unchanged; making both guilty for not lining up with God's Word.

Scripture reveals: A wise man will hear, and will increase learning; and a man of understanding shall attain (acquire) unto wise counsels (Proverbs 1:6).  It was noted that a wise and understanding man, by hearkening and attending to what is delivered, will not only attend to wise counsel but is able to interpret them to others in a clear, precise way; through the inspired writers of the Scriptures.

We are living in a religious time in which deception (hiding the truth) is being manifested by those choosing to ignore "What Thus Saith the Lord" by implanting their own thoughts and ideals, concerning the Scriptures, to justify their ill-conceived ways.

Truth Shall Set
You Free

Scripture reveals: You shall know the truth, and the truth shall make you free (John 8:32).  It was noted that the truth of the Gospel, the truth as presented in God's Word, leads one into all truth, to grow and increase therein, to be free from ignorance or error.

We are living in a world that has become masterful at half-truths (hiding the truth) and suffering from falsehoods; therefore the fullness of the Gospel message needs to be rendered.  As previously noted: If the power of the Gospel is not felt throughout the land, anarchy and misrule, degradation and misery, corruption and darkness will reign.