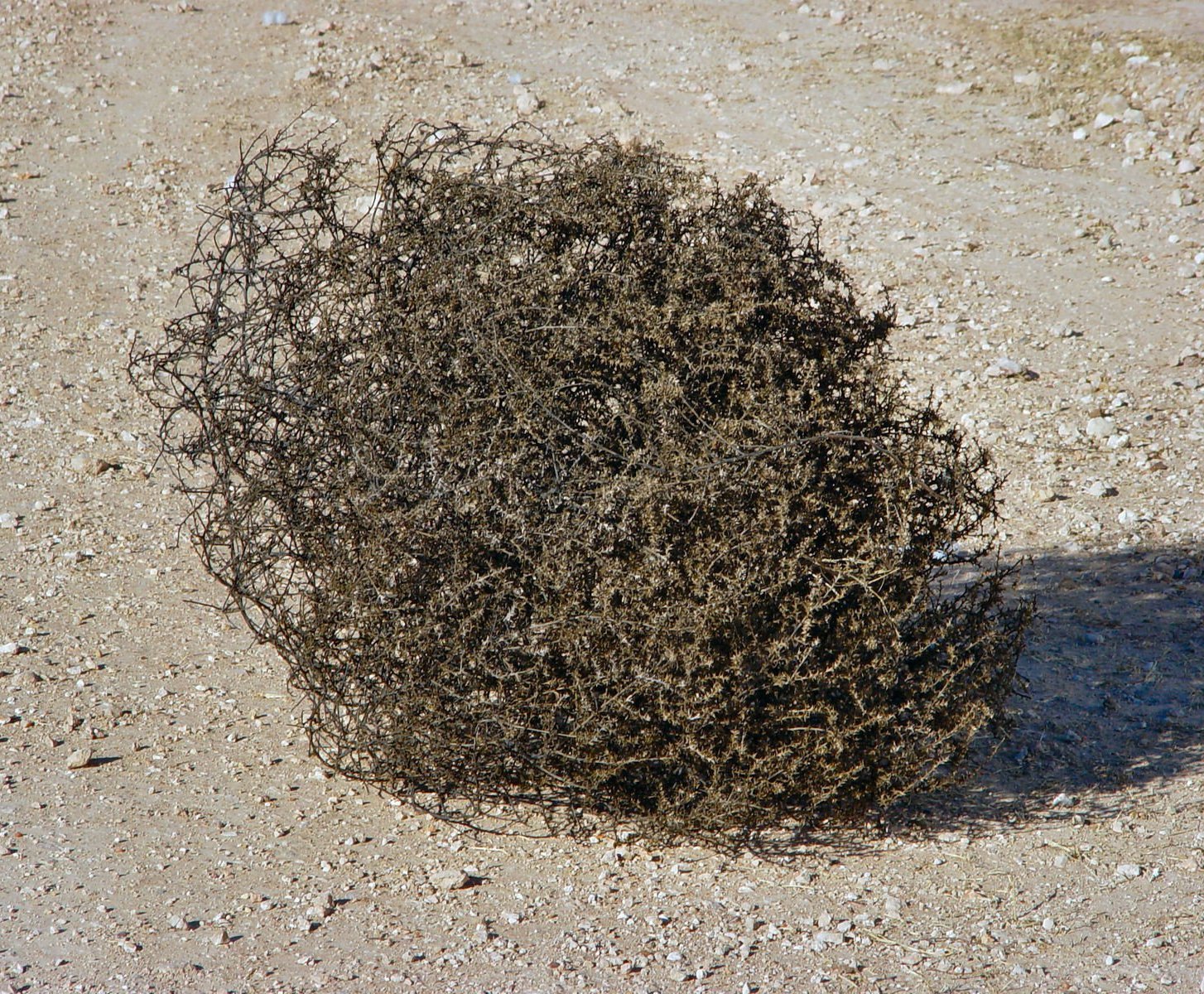 Tumbleweed effect falls into a host of categories, religion being in that number, that can have devastating results, and be dangerous to the soul of man.

The tumbleweed produces no fruit; yet competes with other plant species for resources such as water.  The tumbleweed is a foreign invader identified as the Russian Thistle; possibly a seed or two coming over in a shipment from Russia and taking root.

We are seeing a devastating effect take place in many countries with seemingly harmless tumbleweeds (undetected intrusions) that will bring harm to any nation that does not take action to stop the flow; in that such intrusions could destroy a democratic society.

The tumbleweed when young can be weeded out, or killed with herbicides, while other tumbleweeds (alive and active) sprout up in other uncultivated areas. The aging plant dies after the first frost, breaks off at the stem and begins to tumble, spreading thousands of seeds across the landscape.  Tumbleweeds can travel for several miles, wherever the wind drives them.

Changing the Course
of a Nation

Many lands are seeing a tumbleweed effect in regards to basic freedoms once enjoyed; including religious freedom being tossed to the wind. as the ungodly begin to openly defy the voices of a democratic society.

Such activity often goes unnoticed; as that of a shiny apple that appears beautiful on the surface (its outer appearance) while within is a worm making it no longer worthy of consumption.  Scripture reveals: You make clean the outside of the cup and of the platter (dish) but within are full of extortion and excess (self-indulgence) (Matthew 23:25).

We are seeing similar intrusions; in not only the religious field, but the political arena that would change the course of a nation.  The youth are being targeted to indoctrinate them (at a young age) to accept the tumbleweed effect that would tarnish a nation's alliance to God. 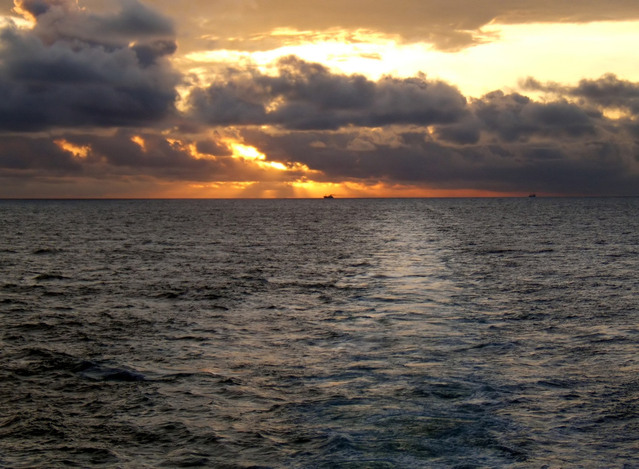 Scripture reveals: Be no more children tossed to and fro, and carried about with every wind of doctrine, by the sleight (trickery) of men, and cunning craftiness, whereby they lie in wait to deceive (Ephesians 4:14).

The Apostle Paul was encouraging his fellow believers not to be tossed to and fro (like tumbleweeds), but to be rooted and grounded, and fruitful; characteristics of which the tumbleweed has no such permanent mooring. Believers were not to remain ignorant to the devices of their adversaries but to be strong in the faith!

The tumbleweed effect is carried about with the wind; as is the indoctrination of ungodly agenda to any who would shallow its bitter pill.  The Apostle Paul warned the people against the sleight (trickery) of men who would attempt to deceive and corrupt; in their insidious and secret way of deceiving.  The tumbleweed effect of today's invasion of disruptive and demanding influence is no different, in an attempt to sway the masses.

Government Control
of the People

There is a movement, in many lands, towards Socialism (government control of the people) that is attempting, before secretly now openly, to promote far-left agenda.  Antonio Gramsci, at the beginning of this movement, stated: Any country grounded in Christian values cannot be overthrown until those roots are cut; to change culture, a long march through the institutions is necessary, only then will power fall into our laps.

He continued in saying: Socialism is precisely the religion that must overcome Christianity.  In the New Order, Socialism will triumph by first capturing the culture via infiltration of schools, universities, churches and the media by transforming the consciousness of society.

Before puberty the child's personality is not yet formed and is it easy to guide its life and make it acquire specific habits, order, discipline, and work.  What comes to pass is not so much because a few people want it to happen; but because the mass of citizens abdicate their response ability and let things be (that is still a major problem today).

There is an ushering in of Marxism and Socialism under such titles as: New World Order, The Great Reset, Build Back Better, Critical Race Theory, Progressives, no longer being secretly planned, but now of a tumbleweed effect, blowing everywhere it may.

It was noted that goals include: Eliminate prayer in schools. Discredit family as an institution. Control schools as tools for promoting Socialism.  Break down cultural standards of morality.  Promote homosexuality as normal, natural, and healthy.  Infiltrate the press, gain control of key positions in radio, TV, and motion pictures. Infiltrate the churches and replace revealed religion with social religion; discredit the Bible.

The difference between the tumbleweed; and agenda that would undermine a nation, is that the tumbleweed is unattractive, tossed abut by the wind; whereas Socialistic agenda is made attractive, its root going far back in history, with a definite direction in mind.

The tumbling habit of tumbleweeds is of a constructive nature towards extensive dispersal of its seeds.  As the tumbleweed goes where it can can tumble unobstructed, so is the far-left agenda (Marxism and Socialism) unless sufficient opposition is rendered to obstruct its flow!

Goliath a Symbol
of Domination

One can be encouraged by David (in Biblical times) who stood up to an opposing giant (Goliath).  It was not in David's own strength or ability to do so with his response to Goliath revealing where David's strength came from.  Scripture reveals: You come to me with a sword, and with a spear, and with a shield: but I come to you in the name of the Lord of hosts, the God of the armies of Israel, whom you have defiled (1 Samuel 17:45).

David's confidence came through his previous experience of the Lord's deliverance on his behalf; in slaying a lion and bear that had threaten the sheep he was responsible for.  Many countries are being threatened by Goliath type threats of domination but as long as there are little David's willing to oppose, looking to God as their source of strength, there is hope!  One man stated: Hope without God is like a ship without a rudder (Anonymous).

The tumbleweed effect of dispersal of its seeds is the hope of many who are planting seeds of Marxism and Socialism.  Karl Marx, the Father of Marxism died with only nine people attending his funeral yet his works of domination flourishes to this day.

In the tumbleweed effect of domination, which we are presently experiencing, many tares (sown by the enemy of democracy) have been planted among the wheat (where democracy prevails), spreading it poisonous agenda.

In the biblical and secular scene there are many writing their own destruction agenda; casting aside sound guidance of the past, introducing others in their destructive agenda; in an attempt to override freedoms formerly embraced.  In regards to the Biblical perspective of such, Scripture reveals: That we may be delivered from unreasonable wicked men for all men have not the faith (2 Thessalonians 3:2).

A certain political leader made frequent use of the Christian vocabulary. He talked about the blessing of the Almighty and the Christian beliefs which would become the pillars of the new government.  He spoke of his spirituality; displaying his tattered Bible and declaring he drew strength for his works from it; with many welcoming him, as a man sent from God. Who was this leader? It was Adolf Hitler.

We are seeing many such personalities arise on the scene today seeking world domination, as a tumbleweed effect; in like manner of others who have surfaced throughout history, blown by the wind, yet in the end perishing, just as the tumbleweed perishes.

There is little in comparison to the tumbleweed that gets blown about with but a little breeze to send it on its way. It does not start in such a manner; for in its beginning it was firmly planted in the soil.  But at the end of its growing season (about a year) it breaks loose from its root structure; leaving its seed behind as it bounces forward, wherever the wind takes it.

The tumbleweed effect, whether it be of a secular or religious nature, often starts in the same manner, well rooted; but somewhere along the line, looses its mooring.  What is unfortunate; is the seedlings it leaves behind, often influences others to continue in like manner, not knowing the risk involved.

Established in the Truth

The Apostle Paul was insistent that believers be established in the truth; because false doctrine was being unleashed in the Church (having a tumbleweed effect), causing many to fall by the wayside. Scripture reveals: I (Paul) marvel that you are so soon removed (turning away) from him that called you unto the grace of Christ to another gospel: Which is not another; but there be some that trouble you, and would (want to) pervert the gospel of Christ (Galatians 1:6-7).

Be no more children tossed to and fro, and carried about (a tumbleweed effect) with every wind and doctrine, by the sleight (trickery) of men, and cunning craftiness, whereby they lie in wait to deceive (Ephesians 4:14). The Apostle Paul was giving a warning to be established in the truth (the Word of God) and not wonder about (a tumbleweed characteristic) by every puff of wind that comes one's way, but be firmly grounded in faith and truth.