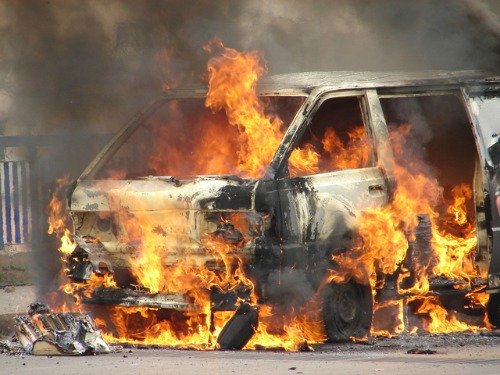 A volatile world is unpredictable and explosive in nature with electronics bringing into focus that which before would not have been possible.  A picture window of events has advantages as well as disadvantages.

An event is foretold in God's Word of two witnesses who will receive power from God to shut heaven that it rain not in the days of their prophecy and power to turn waters to blood; to smite the earth with plagues, as often as they will.

Scripture reveals: And their dead bodies shall lie in the street of that great city, which is spiritually is called Sodom and Egypt, where also our Lord (Jesus Christ) was crucified (Jerusalem).  And they of the people (peoples) and kindreds and tongues (languages) and nations shall see their dead bodies three days and a half and shall not suffer (allow) their dead bodies to be put in graves (Revelation 11:8-9).  These events will be seen worldwide through electronic means.

Events Yet to Unfold

Scripture reveals: They that dwell upon the earth shall rejoice over them (their death), and make merry, and shall send send gifts one to another; because these two prophets tormented them that dwell on the earth.

And after three and a half days, the spirit (breath) of life from God entered into them, and they stood on their feet; and great fear fell upon them which saw them. And they heard a great voice from heaven, saying to them, Come up hither.  And they ascended up to heaven in a cloud; and their enemies beheld them.

And in the same hour was there a great earthquake, and the tenth part of the city fell, and in the earthquake were slain of men seven thousand; and the remnant were affrighted (afraid), and gave glory to the God of heaven (Revelation 11:10-13).  Again, these events will be transmitted through electronic technology; in a fashion that before would not have been possible.

Scripture reveals:  And he (the Antichrist during the Tribulation Period) causes all, both small and great, rich and poor, free and bond, to receive a mark in their right hand, or in their foreheads.  That no man might buy or sell save (except) he had the mark, or the number of the beast (Antichrist), or the number of his name.

And that no man might buy or sell save (except) he that had the mark, or the name of the beast, or the number of his name.  Here is wisdom, Let him that has understanding count the number of the beast; for it is the number of a man; and his number is six hundred threescore and six (666) (Revelation 13:16-18).

The fulfillment of receiving the mark seemed impossible but in a volatile world circumstances can change in a matter of minutes.  An AP article flashed this headline:  STOCKHOLM EMPLOYEES GETTING IMPLANTED WITH MICROCHIPS; along with a video showing the inserting of such between the thumb and index finger of the hand. Later the New York Times revealed that more than 4,000 Swedes had implanted microchips in their hands allowing them to pay for travel and food.

This will not disturb a nonbeliever but to the believer it should bring to mind a warning in God's Word:  If any man worship the beast and his image, and receive his mark (666) in his forehead, or in his hand, the same shall drink of the wine of the wrath of God, which is poured out without (full strength) and shall be tormented with fire and brimstone in the presence of the holy angels, and in the presence of the Lamb (Jesus Christ) (Revelation 14:9-10).  What we are seeing in our day and age is but a prelude towards acceptance of what God's Word warns against.

A volatile world encourages ungodliness by feeding upon the ignorance of man. Television, films, internet, and other devices, wholeheartedly displays the lust of the flesh, the lust of the eyes, and the pride of life mentioned in God's Word.

Scripture reveals: For all that is in the world, the lust of the flesh, and the lust of the eyes, and the pride of life, is not of the Father, but is of the world.  And the world passes away, and the lust thereof, but he that does the will of God abides forever (1 John 2:16-17).  The term world signifies the evil desire and sin which has become so much a part of human existence.

A volatile world is subject to the devices of Satan.  Scripture reveals: And the great dragon was cast out, that old serpent, called the Devil and Satan, which deceives the whole world; he was cast out into (to) the earth, and his angels were cast out with him (Revelation 12:9).

Woe to the inhabitants of the earth and of the sea! For the devil is come down to you, having great wrath, because he knows that he has but a short time (Revelation 12:12).  The Apostle Peter gave warning:  Be sober, be vigilant; because your adversary the devil, as a roaring lion, walks about seeking whom he may devour (1 Peter 5:8).

But also this assurance:  Whom resist steadfast in the faith, knowing that the same afflictions are accomplished (experienced by) your brethren that are in the world.  But the God of all grace, who has called us to his eternal glory by Christ Jesus, after you have suffered awhile, make you perfect, establish, strengthen and settle you (1 Peter 5:9-10).

In a volatile world that is liable to sudden change, violence, or erratic in nature; it would behoove one to cling to God's Word, to sustain and strengthen in the hour of need!

No Divine Assurance
Outside of Christ

A volatile world can help usher one into the Kingdom of God.  A world that is erratic, eruptive, oftentimes explosive, and unpredictable in nature can turn one's attention to the Peace-Giver, the Lord Jesus Christ; who said: Peace I leave with you, my peace I give to you: not as the world gives, give I to you.  Let not your heart be troubled, neither let it be afraid (John 14:27).

There are many religions in the world but none will get one to heaven; outside of Christ.  Scripture reveals: Neither is there salvation in any other: for there is no other name under heaven given among men, whereby we must be saved (Acts 4:12).

There are many feasting on ungodliness, in a volatile world, without realizing the implications for having done so!  One cannot afford the luxury of ignorance towards God's Word without paying the price.

Walking Away from God

In a volatile world there are many inducements to walk away from God but the believer is admonished to walk in Christ despite the ungodly influence of man.  Many in the church are being swayed towards acceptance of secular ways rather than abiding in Christ and His Word.

A Sanctified Life
in Christ

Scripture reveals: Christ loved the church, and gave himself for it.  That he might sanctify (set it apart) and cleanse it with the washing of water by the word.  That he might present it to himself a glorious church, not having spot, or wrinkle, or any such thing; but that it should be holy and without blemish (Ephesians 5:25-27).

Who shall ascend into the hill of the Lord?  Or who shall stand in his holy place?  He that has clean hands, and a pure heart; who has not lifted up his soul to vanity, nor sworn deceitfully. (Psalm 24:3-4).  Make straight paths for your feet, lest that which is lame be turned out of the way; but rather let it be healed.  Follow (pursue) peace with all men, and holiness, without which no man shall see the Lord (Hebrews 12:13-14).

A Separation unto God

Scripture reveals:  What agreement has the temple of God with idols? For you are the temple of the living God; as God has said, I will dwell in them, and walk in them; and I will be their God, and they shall be my people.  Wherefore come out from among them, and be you separate saith the Lord, and touch not the unclean thing; and I will receive you, and will be a Father to you, and you shall be my sons and daughters, saith the Lord Almighty (2 Corinthians 6:16-18).

Having therefore these promises, let us cleanse ourselves from all filthiness of the flesh and spirit, perfecting holiness in fear of God (2 Corinthians 7:1).  In the volatile world we live in; that is changeable, erratic, and unpredictable, one should be drawing closer to God, and the Lord Jesus Christ, rather than walking away.

Because of the ungodly influences of this world; that would draw one as a magnet towards its allurements, the call to come out from among them, and be separate, is even more viable in the times in which we live!