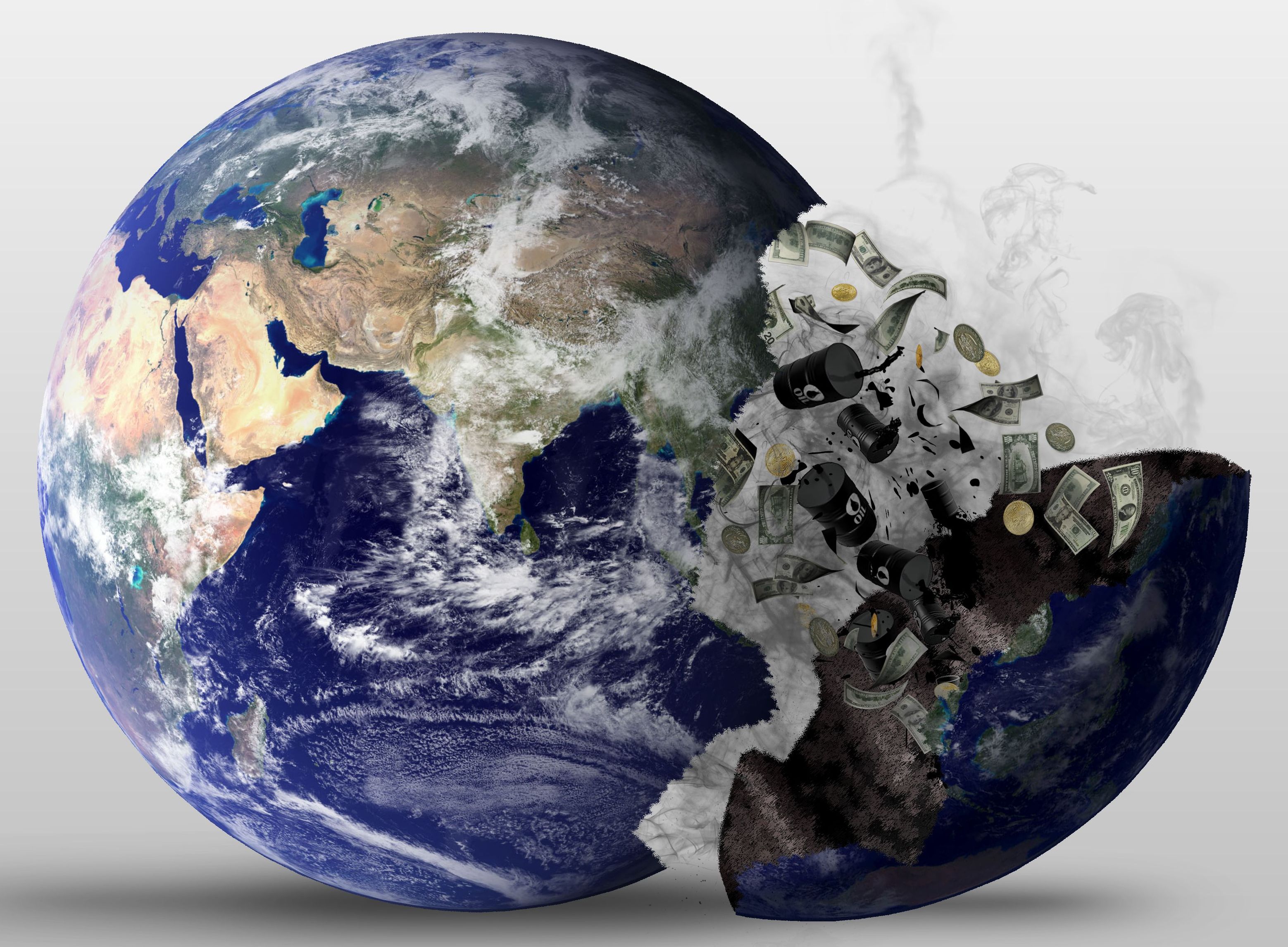 Seeds of corruption are being planted with a probe into the fertile ground of righteousness to offset any productive effort in that area. There is an ongoing effort towards planting and fertilizing the seed of unrighteousness, to take root, rather than the righteousness of God intended from the beginning of Creation.

Seeds of Corruption
A Pivotal Turnaround

It was noted that moral habits cannot safely be trusted on any other foundation than religious principle, nor any government be secure which is not supported by moral habits.  If trust is not diffused, error will be; if the power of the Gospel is not felt throughout the length and breadth of the land, anarchy and misrule, degradation and misery, corruption and darkness will reign without mitigation or end (Daniel Webster).

This was promulgated at the onset of the founding of a new nation that has now done a pivotal turnaround to that which was warned against. Corruption is a lack of integrity or honesty; a moral perversion, impairment of virtue and moral principles, undermining moral integrity; a departure from God's Word; similar words are: Degeneracy, depravity, or defilement.

It was noted that where there is no fear of God, no reverence for God, every evil (seeds of corruption) can and will abound.  The ideal that we humans will be good without God is a deceptive fallacy.  When people are devoid of the knowledge and wisdom that come from believing God and having reverence for Him, they become morally corrupt (planting seeds of corruption), exceedingly evil, violent and destructive.

Words of the past come to haunt those who fail to heed such warnings. Seeds that are planted for the future; eventfully take root and accomplish what was intended; whether seeds of virtue or vice.  We are seeing  activity, in many lands, that represent seeds of corruption planted long ago; one such seed is Marxism and Socialism, cousins of communism.

It was noted that their planted agenda includes:  Discredit the family as an institution, eliminate all laws governing obscenity by called them violation of free speech and free press, break down cultural standards of morality, control of the schools to use as tools for promoting socialism, infiltrate the churches and replace revealed religion with social religion, and discredit the Bible.

Other Nations Drink
of Her Fornication

Scripture reveals: And there followed another angel, saying, Babylon is fallen, is fallen, that great city, because she made all nations drink of the wine of the wrath of her fornication (Revelation 14:8).

It was noted that the angel immediately followed a former who proclaimed the fall of Babylon; a city famous for its pride and haughtiness, for its tyranny, and its idolatry.  Babylon's fall was because she made all nations to drink of the wine of the wrath of her fornication (ungodliness and corruption).

Pleasures of the world was promised; with great appearances of holiness and religion.  Just as wine intoxicates; she not only drink of the wine herself, but she drew other nations into the same idolatrous practice as well; releasing God's judgment on herself and others who participated in her evil deeds.

Tree Known by its
Fruit

It was noted that it is the goodness of the tree that makes the fruit good; for if the tree is corrupt, the fruit will also be corrupt.  In placing this Scripture in relationship to man; there are those who are destitute of the truth, having corrupt principles and practices, with suffering of the souls of men as a result.

Such individuals pretend to do good works; setting themselves as men of religion and holiness, yet allow evil things, with works and actions bearing witness of such.  Adoption of worldly traits and allurements, within the church, has been responsible for withdrawal of Biblical instructions of the past.

Scripture reveals: God looked upon the earth, and behold, it was corrupt; for all flesh had corrupted his way upon the earth (Genesis 6:12).  It was noted that "behold" is used to denote the certainty of corruption.

All men (except Noah and his household), being of the flesh, carnal and unregenerate; having corrupted their way, forsaking true religion, with their idolatrous manners; with their life and conduct mired in uncleanness and wickedness.  We are seeing more and more of such as seeds of corruption continue to be manifested, allowed to grow, and even nourished.

Abomination in the Sight
of God

Scripture reveals: And the Lord said to Moses, Go, get you down; for your people, which you brought out of the land of Egypt, have corrupted themselves (Exodus 32:7).  It was noted that their ways and manners; their minds and the imaginations of their hearts were first corrupted, leading to a corruption of actions, defiling themselves more and more, becoming abominable in the sight of God.

The Lord called these people not his people, being displeased with them; but calls them Moses' people, having been committed to his care and charge, the instrument of their deliverance, making the evil appear even greater.

Moses was away receiving the Ten Commandments from God; and without his continued leadership, the people returned to idol worship of the nation they have been delivered from.  This emphasizes the importance of continued godly leadership of any nation.

Scripture reveals: I (Moses) know that after my death, you will utterly corrupt yourselves, and turn aside from the way which I have commanded you; and evil will befall you in the latter days; because you will do evil in the sight of the Lord, to provoke him to anger through the work of your hands (Deuteronomy 31:29).

It was noted that the people would turn away from the commandments of God, which Moses had given them, and in which they were directed to walk; but as foretold, would wander away from them.  Later, the prophet Nehemiah, confirmed this, in saying: We have dealt (acted) very corruptly against you (God), and have not kept the commandments, nor the statues, nor the judgments (ordinances) which you commanded your servant Moses (Nehemiah 1:7).

Weighed Down with
Iniquity (Lawlessness)

The prophet Isaiah addressed the seeds of corruption problem, in saying: O sinful nation, a people laden (weighed down) with iniquity (lawlessness), a seed of evildoers, children that are corrupters: they have forsaken the Lord, they have provoked the Holy One of Israel (God) to anger, they are gone (turned) away backward (Isaiah 1:4).

It was noted they were a people laden with iniquity, full of sin, as seed of evildoers; not said of their fathers, but of themselves, having been planted a right seed, but now were degenerate, a wicked generation of men, not only of themselves but others as well.

They had become backsliders and revolters, turning their back on God, and casting His law behind them.  This feature is prevalent in many once godly nations, having allowed seeds of corruption to change their status as a nation under God.

There is a need for righteousness to be instituted that no longer adheres to seeds of corruption.  Scripture reveals: Put off concerning the former conversation (conduct) the old man, which is corrupt according to the deceitful lusts; and be renewed in the spirit of your mind, and that you put on the new man which after God is created in righteousness and true holiness (Ephesians 4:22-24).

It was noted that one is to put off the old man, to renounce one's pre-conversion life and sins; to be renewed in one's mind, to be constantly changed, brought more and more in line with God; having put on the new man, that is, to assume a new nature (character) and conduct (life) at conversion in Christ, as one's Lord and Savior.

Deliverance from Seeds
of Corruption

Scripture reveals: As by one man's disobedience (Adam) many were made sinners, so by the obedience of one (Jesus Christ) shall many be made righteous (Romans 5:19).  For the wages of sin (seeds of corruption) is death; but the gift of God is eternal life through Jesus Christ as our Lord (Romans 6:23).  Wages emphasizes what we deserve; gift of God emphasizes God's unmerited favor (grace), though His Son, the Lord Jesus Christ, towards salvation of the soul.

Seeds of corruption firmly implanted in the heart of man needs a Deliverer, His name is Jesus.  Scripture reveals: Be born again, not of corruptible (perishable) seed, but of incorruptible (imperishable), by the word of God, which lives and abides forever (1 Peter 1:23).  Corruptible seed is that which was originally tinted by sin, through Adam's disobedience to God's Word, in the Garden of Eden.

Jesus, one's Deliverer, from the clutches of sin, extends an invitation to all: I stand at the door (door of one's heart) and knock; if any man hear my voice, and open the door (only you can), I will come in to him, and will sup (dine) with him, and he with me (Revelation 3:20).  I accepted His invitation 44 years ago; was forgiven of sin, and have been dining in His presence since that eventually day; and so can you!