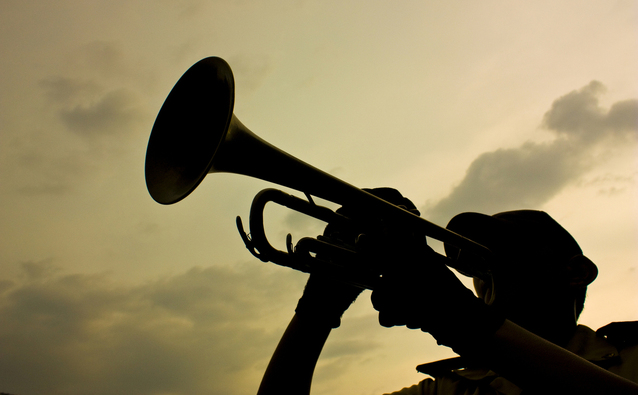 Sound the alarm is to awaken people to the reality of what lies before them; for there are many who need to wake up, in regards to ungodly ways that have infiltrated the land. There is ungodliness that is polluting many once godly nations; wrongly influencing lives of young and old alike. There is a consumption that undermines compliance with God's Word; with extreme lack of fear (reverence) towards the God of Creation.

In a call for repentance, in speaking the words of the Lord, the prophet Joel cried out: Blow the trumpet in Zion, and sound an alarm in my holy mountain: Let all the inhabitants of the land tremble: for the day of the Lord comes, it is nigh (near) at hand (Joel 2:1).

It was noted that the trumpet was used primarily for religious purposes to call the congregation together for meetings, to usher in the beginning of the month, and to note solemn days of festive occasions. In this instance, it is to be used to sound the alarm to warn the people of the seriousness of the crisis that was upon them.

Sound the Alarm
Tell My People

The prophet Isaiah, in speaking the words of the Lord, said: Cry aloud, spare not (do not hold back), lift up your voice like a trumpet.  and show (tell) my people their transgressions, and the house of Jacob their sins (Isaiah 58:1).  We are seeing many hold back failing to reveal what is happening because they fear a backlash for having done so; or have allowed themselves to be caught up in the same!

There are those who have grown at ease in their own ill-conceived sin. They have had their conscience seared with a constant flow of immorality.  No wonder many nations have drifted away from their moral compass and are headed towards the wrath of God; unless repentance comes to the forefront.

No wonder our younger generation has lost their sense of direction.  No wonder many individuals have lost their once held integrity.  Why, because of those who are holding back, not giving warning; do not sound the alarm concerning the immorality that is flooding the land; or have become blinded by acceptance and tolerance of the same.

The prophet Jeremiah, in lamenting over Judah, was to sound the alarm, speaking the words of the Lord, in saying:  How long shall I see the standard (banner), and hear the sound of the trumpet? For my people is foolish, they have not known me: they are sottish (stupid) children, and they have none (no) understanding: they are wise to do evil, but to do good they have no knowledge (Jeremiah 4:-2122). Jeremiah had witnessed the results of the people's failure to take the Word of God serious.

Many nations have been polluted from within; no longer embracing the ways of the Lord, having allowed the ungodly to flourish and overtake the land; with laws and judgments being handed down that help facilitate indulgence of ungodly ways.

The mainstream and social media, along with devices of ungodly entertainment, help promote the ungodliness of man.   Indifference abounds; with the acceptance of the previously unacceptable, and only a few sounding the alarm!

Failure to Give
Warning

God revealed to the prophet Ezekiel what would happen if he did not sound the alarm: But if the watchman see the sword come, and blow not the trumpet, and the people are not warned; if the sword come, and the people be not warned; if the sword come,  and take any person from among them, he is taken away in his iniquity; but his blood will I require at the watchman's hand.  So you, O son of man (Ezekiel), I have set you a watchman to the house of Israel; therefore you shall hear the word at my mouth, and warn them from me.

Say to them, As I live, saith the Lord God, I have no pleasure in the death of the wicked: but that the wicked turn from his way and live: turn you, turn you from your evil ways; for why will you die, O house of Israel (Ezekiel 33:11)?  It was noted that Ezekiel did not dwell exclusively on the subject of Israel's sin and judgment; like all Old Testament prophets, he included a prediction of a time when Israel would be restored to her land and to the blessings of God.

Scripture reveals:  If the trumpet give an uncertain sound, who shall prepare himself to the battle? So likewise you, except you utter by the tongue words easy to understand, how shall it be known what is spoken? For you shall speak into the air. There are, it may be, so many kinds of voices in the world, and none of them is without signification (meaning) (1 Corinthians 14:8-10)?

It was noted that a man was asked: If given an hour to explain the Gospel to someone (to sound the alarm), how would he do so? He said he would spend the first fifty minutes on the bad news of judgment and then the last ten minutes on the good news of salvation, because without the context of judgment one would not appreciate or even understand salvation!

Many nations have come to the place; they now find themselves in, because the trumpet was not blown, the warning of judgment not given; no one to sound the alarm, or the trumpet giving an uncertain sound; and due to lack of clarity, many continue to consume the ungodliness of man?

Scripture reveals that fate of such; unless repentance comes to the forefront:  The wrath of God is revealed from heaven against all ungodliness and unrighteousness of man, who hold (suppress) the truth in unrighteousness (Romans 1:18).  Now is the time to sound the alarm; gave the message of both wrath and mercy; to not hold back!

Scripture reveals: For God so loved the world, that he gave his only begotten Son (the Lord Jesus Christ), that whosoever believes in him should not perish, but have everlasting life. For God sent not his Son into the world to condemn the world, but that the world through him might be saved.  He that believes on him is not condemned: but he that believes not is condemned already, because he has not believed in the name of the only begotten Son of God (the Lord Jesus Christ) (John 3:16-18).

He that believes on the Son has everlasting life: and he that believes not the Son shall not see life; but the wrath of God abides (remains) on him (John 3:36).  Sound the alarm is very extremely needful for today!  Today is the day of salvation for tomorrow may be too late! Scripture reveals: Whosoever shall call upon the name of the Lord (the Lord Jesus Christ) shall be saved (John 10:13).  It is noted that this stresses human responsibility in regards to the salvation of one's soul.