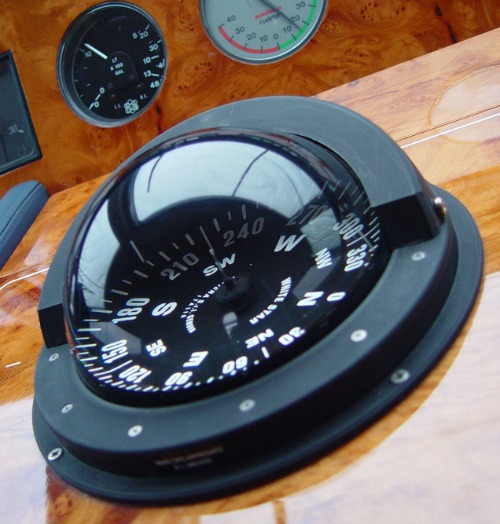 The moral compass of any nation, or individual, needs to be zeroed in on the Word of God; lack thereof, can lead to misconduct and immorality.  The term moral is in reference to the manner of living in regards to right and wrong.  God's Word readily identifies that one is to keep within the confines of virtuous living.

Scripture reveals:  I beseech you therefore, brethren, by the mercies of God, that you present your bodies a living sacrifice, holy, acceptable to God, which is your reasonable (rational) service. And be not conformed to this world: but be you transformed by the renewing of your mind, that you may prove what is that good and acceptable, and perfect will of God (Romans 12:1-2).

It was noted that the body that had been an instrument of sin bearing the moral compass of the unsaved; upon conversion it is presented to God, as a channel through which the righteousness of God is manifested.

The believer in Christ is to resist being poured into the mold of present day thinking, value systems, and conduct of this world.  He evaluates every decision on the basis of God's Word; not what the world system would like him to believe.

Sometimes the breeding ground of immorality is allowed to take root in unexpected places.  Scripture reveals:  In a great house there are not only vessels of gold and silver, but also of wood and earth (clay); and some to honor, and some to dishonor.

If a man therefore purge (cleanse) himself from these (the latter), he shall be a vessel to honor, sanctified (set apart), and meet (useful) for the master's use, and prepared to every good work. Flee also youthful lusts; but follow (pursue) righteousness, faith, charity (godly love), peace, with them that call on the Lord out of a pure heart (2 Timothy 2:20-22).

God is not in the dark concerning those whose moral compass has not deviated from the truth of His Word.  Scripture reveals: Nevertheless the foundation of God stands sure, having this seal, The Lord knows them that are his.  And, let every one that names the name of Christ depart from iniquity (2 Timothy 2:19).

Influence to Offset
Once Held Convictions

An encyclopedia noted the defection of a compass needle is due to local magnetic influences.  Those influences will offset a true reading that is necessary for navigational purposes.  The moral compass of once godly nations have allowed ungodly influences to offset previous held moral values.

There is a rising trend towards acceptance of immorality that is being openly promoted.  This trend is also being an influence towards the youth of the land being bombarded by ungodly and immoral behavior; without the benefit of God's Word being taught as a deterrent.

There is a corrective mechanism for any errors in the magnetic compass called a gyroscope.  It resists efforts to realign in any other direction; if it begins to wobble, a weight brings it back into line.

In the Biblical sense this is the Word of God; when properly promulgated and allowed to take root in the hearts and lives of the people.  However, we are seeing a generation that is being introduced to a permissive gospel that allows one to set their own moral compass.

Preaching Will Bear Its
Legitimate Fruits

A legendary evangelist of the first Great Awakening, Charles G. Finney, stated:  Brethren, our preaching will bear its legitimate fruits.  If immorality prevails in the land, the fault is ours to a great degree.  If there is a decay of conscience, the pulpit is responsible for it.

Greatness of a Nation

Ungodliness in the land must not be allowed to continue its growth; for godly nations flourish, with the blessings of God, when their moral compass is of a godly nature.  Scripture reveals:  Blessed is the nation whose God is the Lord; and the people whom he has chosen for his own inheritance (Psalm 33:12).

The greatness of a nation is not based on earthly gains but that of a heavenly nature.  It is devastating to see acceptance of ungodliness openly flaunted before all.  The once godly guidelines (the Word of God) that keeps a nation afloat are being recklessly cast aside; with the moral compass no longer lining up with God's Word.

Scripture reveals:  This know that in the last days perilous times shall come (2 Timothy 3:1).  It gives characteristics of that time:  Men shall be lovers of their own selves, covetous, boasters, proud, blasphemers, disobedient to parents, unthankful, unholy, without natural affection, truce breakers, false accusers, incontinent (without self-control), fierce, despisers of those that are good, traitors, heady (haughty), high-minded, lovers of pleasures more than lovers of God; having a form of godliness, but denying the power thereof: from such turn away (2 Timothy 3:2-5).

A form of godliness is mere religion without power or spiritual life. Churches, in many instances, are indulging in the concept of worldliness rather than godliness.  They are taking in the filth of the world rather than rejecting it; walking away from God's Unadulterated (Pure) Word, but embracing it just enough to make them feel comfortable with their own moral compass.

Scripture reveals that such will not be treated lightly:  For the time is come, that judgment must begin at the house of God; and, if it first begin at us, what shall the end be of them that obey not the gospel of God? And if the righteous scarcely be saved, where shall the ungodly and the sinner appear (1 Peter 4:17-18)?

If the believer's moral compass is true to God's Word; has not been misaligned by worldly influences, the essential mission of being a light to the world will be manifested.

There is a greater need than ever for light to clearly shine forth; in the midst of darkness that has evaded the land.  There is a human depravity that is ignoring all sense of decency; with a lack of regard, towards humanity or life itself.

It was noted that darkness is the absence of light; and darkness alone cannot dispel the light, but the smallest light can dispel the greatest darkness.  The believer in Christ is to allow their light to shine forth; with their moral compass not being swayed by worldly influences.

The Moral Compass
of Yesteryear

It was noted that a Christian should live a holy life that reflects the nature of God who saved him.  He should apply the biblical principles of separation and avoid what is against a biblical standard of purity, offensive to the conscience, or failure to follow the example of Christ.

When a believer applies such a concept to the moral compass of their life they will truly shine forth as a light to the world.  The moral compass of yesteryear will have been cast aside with its irregularities, with one's adherence to God's Word.

Many voices of the past have made utterances as to the moral compass that is necessary to maintain the status of a godly nation; but those voices now seem to be distant.  In the end; if repentance and a true bearing according to God's Word is not sought, it will eventually bring devastation to any nation.

2 Chronicles 7:14 needs to come into the limelight: If my people, which are called by my name, shall humble themselves, and pray, and seek my face, and turn from their evil ways; then will I hear from heaven, and will forgive their sin, and will heal their land.

It was noted that while this promise was originally given to King Solomon regarding the people of Israel, it is applicable to all who will call on the Lord in repentance and faith.  In the process of doing so, the moral compass will no longer be easily disturbed, will be able to resist efforts to realign it with the ways of the world, through the Word of God bringing it back into proper alignment again.