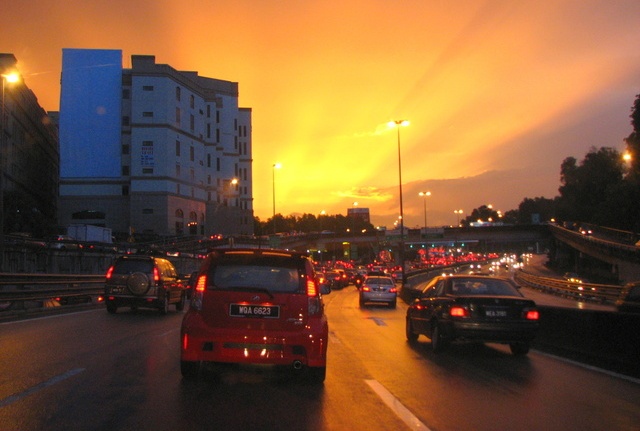 Instant gratification has become the norm in our modernistic society. We live in a world that has been instantly nurtured through modern day technology; as revealed by the prophet Daniel, regarding end times. Scripture reveals:  Daniel was told to shut up the words, and seal the book, even in the time of the end: many shall run to and fro, and knowledge shall be increased (Daniel 12:4).

It was noted that the knowledge of prophecy will be increased; and things will appear plainer as one nears those times.  There are many who are seeking the truths of God's Word; while in others there is a progressive walking away from that Word; with instant gratification in the wrong direction taking place.

The World is taking on a sleeping giant that has materialized; geared towards acceptance of the ungodliness of man.  Daniel pointed out that spiritual knowledge would be revealed; as the end of time grew near, but we are also seeing resistance to such knowledge being exercised.

The term gratification is the act or instant of satisfaction; appeasing one's mind, taste, appetite, desires of the heart, towards that which affords pleasure.  Similar words are: Carnal delight, self-gratification, self-indulgence, and sensual pleasure.

We are living in a society that affords pleasure through instant gratification by simply pushing a button to bring the desires of one's heart into focus.  Daniel was referring to knowledge of spiritual things, evangelist truths and doctrines, being in abundance, but a satanic assault has enhanced an ungodly assault in the opposite direction through knowledge of ungodly methodology being enhanced.

Scripture reveals that in the days of Moses; had he continued in the role of being the son of Pharaoh's daughter, he could have benefited from that title to feast on the pleasures of Egypt.  However, he chose rather to suffer affliction with the people of God, than to enjoy the pleasures of sin for a season.

Esteeming the reproach of Christ greater riches than the treasures of Egypt: for he had respect (looked) to the recompense of the reward.  By faith he forsook Egypt, not fearing the wrath of the king: for he endured, as seeing him who is invisible (Hebrews 11:25-27).  Moses could have had instant gratification through the treasures of Egypt; but chose rather to suffer affliction with the people of God.

His gratification would come later in life; having been chosen by God to lead his people out of Egypt; spearheaded by the mighty hand of God. There are many today who are suffering a similar plight; simply because they as Moses, chose to believe in the one who is invisible, that dwells in the heart of every believer (the Lord Jesus Christ).

Withheld Not Any
Pleasure

Scripture tells of King Solomon who appeased himself with what the world offered towards instant gratification: Whatever my eyes desired I kept not from them, I withheld not my heart from any joy (pleasure): for my heart rejoiced in all my labor: and this was my portion (reward) in all my labor (Ecclesiastes 2:10).  At that point in time Solomon denied himself of nothing that was pleasing to the eyes; indulging himself in whatsoever his heart desired.

Later in life; after having witnessed all his accomplishes, Solomon had a different outlook: Let us hear the conclusion of the whole matter: Fear God, and keep his commandments; for this is the whole duty of man. For God shall bring every work into judgment with every secret thing, whether it be good, or whether it be evil (Ecclesiastes 12:13-14).

Solomon, despite his accomplishments towards self-appeasement, came to the realization that the controlling factor in life should be to fear God, and keep His commandments; that judgment would bring every secret work to the forefront, whether good or evil, with reward being either in the way of grace or punishment.

A Covenant with the Eyes

Job made a determination, concerning instant gratification, in saying: I made a covenant with my eyes; why then should I think (look intently) upon a maid (young woman) (Job 31:1).

It was noted that Job claims moral purity and fidelity to his wife.  The eyes are inlets to many sins; one is not to employ the eyes in looking on objects that might ensnare the heart, and lead one to the commission of sin, but to take every precaution to guard against it.

Living in an instant gratification of the wrong object is even more accessible today; through the Internet that is readily available, towards feeding lustful desires, at the push of a button or swipe of a finger.  Job chose moral purity rather than feasting on that which would lead to sin.

War Against the Soul

It was noted that the term World signifies the evil desire and sin so much a part of human existence.  Fleshly lusts, which war against the soul (often through Satanic influence), which are many, are called worldly lusts.

Satan places instant gratification before one's eyes; with his deceptive ways, for one to yield to his devious methods that one may be ensnared into a life of sin.  It has been said that sin will do three things in one's life: It will take one where they never intended to go; it will keep one longer than they intended to stay; and it will cost one more than they intended to pay.

The Apostle Peter wrote: I beseech you as strangers and pilgrims, abstain from fleshly lusts, which war against the soul (1 Peter 2:11). The internet can be a healthy device; unhealthy as well if one gets taken into captivity with its ungodly influence.

The availability of the internet had become increasingly more dominant in many lands; with consumption at a rapid increase.  Handheld devices that feeds millions in many nations can be toxic and addictive to the user.

Peter said to abstain from fleshly lusts; not to get caught up the entrapment of such that wars against the soul.  Knowledge has been vastly increased towards instant gratification of the fleshly desires of man; through the lust of the flesh, and the lust of the eyes, if not abstained from; and can become a threat to where one spends eternity.

Scripture reveals: Who being past feeling have given themselves over to lasciviousness (a license to immorality), to work all uncleanness with greediness (Ephesians 4:19).  When one begins to consume that which is placed before one's eyes (of a lustful nature); there is a greediness to consume more and more as one falls a victim to its embrace.

It was noted that being past feeling means having become calloused. Those who have gone deep in sin become insensitive to moral right and wrong.  Their conscience is seared so they have lost all sense of sin; do not feel the load of guilt, without any concern about it, but on the contrary commit it with pleasure (that of instant gratification), boast of it, glory in it, defend it publicly, and openly declare it, and stand in no fear of future judgment.

In speaking of Israel, which had departed from the ways of God, the Psalmist declared the words of the Lord: So I gave them up to their own hearts lust: and they walked in their own counsels (Psalm 81:12).

It was noted that sometimes God gives such up, when they sinned, for their chastisement, as men did not like to retain God in their knowledge; He turned them over to their vile affections (that of a reprobate mind), after the imagination of their own evil hearts, having not allowed the counsel and directions of God to take heart.

Many nations are pursuing a similar path; having not taken into account what happened to Sodom and Gomorrah.  Scripture reveals: God turned the cities of Sodom and Gomorrah into ashes, condemned them with an overthrown (destruction), making them an example to those that after (afterward) should live ungodly (2 Peter 2:6).

Scripture reveals: Teaching us that, denying ungodliness and worldly lusts, we should live soberly, righteously, and godly in this present world (Titus 2:12).  Put on the Lord Jesus Christ, and make not provisions for the flesh, to fulfill the lusts thereof (Romans 13:14).

It was noted that sin brings lust, which is the root and foundation of all sin; all the evil in the world arises from it, and the world itself is full of it.  One should not seek opportunities to satisfy deep-seated desires of the sin nature, but should seek occasion to manifest the works that are consistent with a new life in Christ.

A Way Which Seems
Right

Instant gratification is not always the best way!  Scripture reveals: There is a way which seems right to a man; but the end thereof are the ways of death (Proverbs 14:12).

Enter you at the strait gate: for wide is the gate and broad to is the way, that leads to destruction, and many there be which go in thereat: Because strait is the gate, and narrow is the way, which leads to life, few there be that find it (Matthew 7:13-14).

Scripture gives a recipe for repentance:  If my people, which are called by my name, shall humble themselves, and pray, and seek my face, and turn from their wicked ways: then will I hear from heaven, and will forgive their sin, and will heal their land (2 Chronicles 7:14).

It was noted that while this promise was originally given to King Solomon regarding the people of Israel, it is applicable to all who will call on the Lord in repentance and faith.  This verse stands as a high expression of God's loving readiness to hear the prayers of a repentant people.