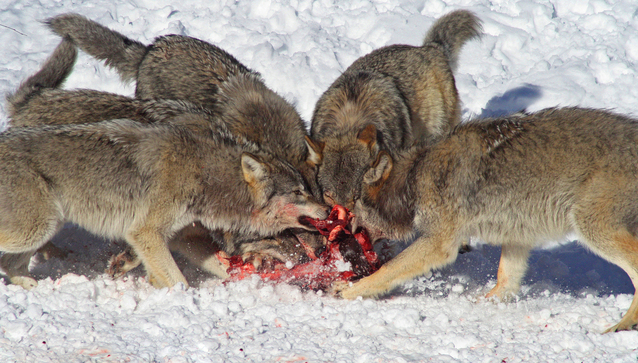 Ravening wolves mentioned in God's Word can be equated to human behavior to prey on others being ready to devour.  There is a fortitude in those seeking power that desire to dominate any opposition; seeking out weaknesses before pouncing.

Before a pack of ravening wolves (usually 2 to 6) attack their prey they seek out the young, old, or otherwise weaker members of their prey because they are easier to capture and devour.  We see this happening today with human behavior geared towards character assassination, to undermine any who are in opposition, with a power grab in mind.

In a wolf pack its members form strong social ties and order maintained by a dominance power structure.  We see this trend in humans who seek power over others; to formulate ungodly agenda, that will one day bring destruction, as that of ravening wolves, to any nation who rules out godliness and the need for God.

There is a pathway to destruction that is outweighing the social justice that once was a norm.  A cancel and submission type culture exists that shuns norm behavior; encouraging immorality that  is condemned in God's Word.

We are seeing nations seeking world dominance, coming forth as ravening wolves; yet gentle in their approach so as not to be immediately recognized as such.  They are ready to pounce as opportunities arise or are forced into existence.

Wolves usually hunt as a unit in their territory until and opposing pack attempts to challenge their domain.  It is the same with humans seeking world domination; who in the end will not share their goal with another but will in time turn on each other.

Scripture reveals: I know this, that after my departing shall grievous (salvage) wolves enter in among you, not sparing the flock (Acts 20:29).  It was noted that Apostle Paul was predicting that upon his departure, false teachers comparable to ravening wolves for their craft and cunning, would enter in secretly, not sparing the flock.

They would fleece rather than feed it, make merchandise of it, poisoning it with erroneous doctrine, and subverting the truth.  There would be an amassing of such, as ravening wolves, no longer quiet in their demeanor but demanding acceptance of their erroneous doctrine.

As old saints of God depart for their heavenly reward replacements are not of the same caliber!  A new generation of believers, under new leadership, are adopting the ways of the world rather than rejecting such allurement.

There is an avalanche of ungodliness coming into acceptance with its ultimate goal of undermining the Word of God and any warnings against those who do so.  Scripture tell us: The wrath of God is revealed from heaven against all ungodliness and unrighteousness of men, who hold (suppress) the truth in unrighteousness (Romans 1:18).

The Apostle Paul wrote: Do I now persuade men, or God? Do I seek to please men? For if I yet pleased men, I should not be the servant of Christ (Galatians 1:10).  The words "SHOULD NOT" needs to be highlighted denoting the seriousness of failure to preach the Unadulterated (Pure) Word of God!

There is a fostering in of ungodly concepts that would not pass the test if God's Word was strictly adhered to.  The ravening wolves concept, is knocking at the door, seeking to destroy, but the Lord gives assurance that such would not be the case; and how a believer's response should be.

I send you forth as sheep in the midst of wolves: be you therefore wise as serpents, and harmless (innocent) as doves (Matthew 10:16).  It was noted that the serpent is a very sharp sighted cunning creature that uses various methods for its own preservation.

Harmless as doves was to avoid snares and traps laid towards the disciples of Christ but to maintain the innocence and harmlessness of the dove.  The disciples were to be above wicked cunning and craftiness, without malice and wrath, not seeking revenge, but meek and humble in their deportment.

You Shall Know Them

In His description of false prophets, who came in sheep's clothing but inwardly were as ravening wolves, Jesus revealed how they could be readily identified: You shall know them by their fruits.  Do men gather grapes of thorns, or figs of thistles? Even so every good tree brings forth good fruit; but a corrupt tree brings forth evil (bad) fruit.

It was noted that a certain political leader made frequent use of Christian vocabulary. He spoke about the blessing of the Almighty and the Christian beliefs which would become the pillars of his new government.

He declared his spiritually to the press; displaying his tattered Bible, and that he drew the strength for this great work from it.  He was welcomed by many Christians as a man sent from God!  Who was this leader? It was Adolf Hitler.  He was one of many who would  fulfill the prophecy of those who would come in sheep's clothing but inwardly were as ravening wolves.

Scripture reveals: Her princes (speaking of those in the prophet Ezekiel's day) in the midst thereof are like wolves ravening the prey (ravening wolves), to shed blood, and to destroy souls (lives) to get dishonest gain (Ezekiel 22:27).

It was noted that those who should have protected persons and property; are like wolves, subtle and cruel, preying upon the weak.  In identifying the catalog of the nation's sins, every guilty party is singled out for judgment; no one is left out.  Those in rebellion to God's Word; unless repentance is sought, will one day find the judgment of God as a consuming fire.

Scripture reveals: Wherefore a lion out of the forest shall slay them (those in the prophet Jeremiah's day), and a wolf of the evenings shall spoil (destroy) them, a leopard shall watch over their cities: every one that goes out thence shall be torn to pieces; because their transgressions are many, and their backslidings are increased (Jeremiah 5:6).

It was noted that a wolf in the evenings shall destroy them refers to having sought its prey all the day; is hungry, raging and furious, tearing and destroying whatever prey it meets.  We are seeing this happen in many lands by those seeking to dominate and control.

Christianity will continue as a mainstay in the world; despite all efforts of those who are like ravening wolves attempting to eliminate its very presence.  Jesus said to the Apostle Peter: You are Peter, and upon this rock I will build my church: and the gates of hell shall not prevail against it (Matthew 16:18).

When a nation or individual seeks God's forgiveness, and turn from their wicked ways; an assurance is given in God's Word:

If my people, which are called by my name, shall humble themselves and pray, and seek my face, and turn from their wicked ways; then will I hear from heaven, and will forgive their sin, and will heal their land (2 Chronicles 7:14).

It was noted that while this promise was originally given to King Solomon regarding the people of Israel; it is applicable to all, who will call on the Lord in repentance and faith.  This verse stands as a high expression of God's loving readiness to hear the prayers of a repentant people.

A Nineveh type repentance is needed in many lands that are no longer under the godly influence of the past; having allowed the seed of unrighteousness to be planted.  Scripture reveals that Nineveh's wickedness had came before God and He sent His prophet to sound the alarm.

And as he (Jonah) begin to enter into the city a day's journey, he cried out: Yet forty days, and Nineveh shall be overthrown (destroyed). So the people of Nineveh believed God, and proclaimed a fast, and put on sackcloth (a sign of repentance), from the greatest of them even to the least of them  (Jonah 3:4-5).

God saw their works, that they turned from their evil way; and God repented (relented) of the evil, that he had said that he would do to them; and he did it not (Jonah 3:10).  It was noted that God did not change in His ultimate intention toward the Ninevites: rather, they changed in their attitude toward Him!  On the basis of that change, God could deal with them in grace, rather than judgment as their failure to repent would have necessitated.

Where are the men of God who are willing to blow the trumpet and sound the alarm; to give warning of coming destruction, as Jonah did, until repentance came to the forefront?

Let us pray that nations who have drifted away from God, allowing ungodliness to reign in the land, will turn to God having cast aside their adulterous ways, and once again become tuned into "What Thus Saith the Lord!"