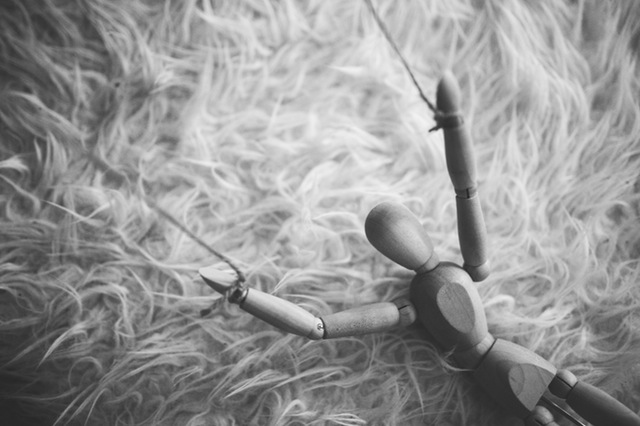 A Puppet Christian is one whose actions are controlled or influenced by another.  We are live in a world that dictates the moral habits of others; with one's behavior being the direct result of such influence. In such a setting one's strings are pulled to control movements to the glee of the puppeteer.

Scripture reveals: Know you not, that to whom you yield (present) yourselves servants to obey, his servants (slaves) you are to whom you obey; whether of sin unto death, or of obedience unto righteousness (Romans 6:16)? Those under such an influence may be promised liberty but become the servants of corruption.

Scripture reveals: While they (the deceivers) promise them liberty, they themselves are the servants of corruption: for of whom a man is overcome, of the same is brought in (into) bondage (2 Peter 2:19). There are many who have become a slave to what is contrary to God's Word. There is the influence of ungodliness that has captured the attention of many; with little effort to rid oneself from its clutches.

A Puppet Christian
Leadership of the Church

When Moses, departed to go up to the Mount of God; the people soon returned to their pagan influence, by preparing a golden calf to worship.  Scripture reveals: And the Lord said to Moses, Go, get you down; for your people, which you brought out of the land of Egypt, have corrupted themselves (Exodus 32:7). When the leadership of the church no longer ministers the wholeness of God's Word; congregations are easily influenced towards the ways of the world, rather than God's Unadulterated (Pure) Word, thereby allowing others to pull their strings bringing one into a Puppet Christian status.

Scripture reveals the hazard of being evaluated to a puppet Christian status: For if after having escaped the pollutions of the world through the knowledge of the Lord and Savior Jesus Christ, they are again entangled therein, and overcome, the latter end is worse with them and the beginning. For it had been better for them not to have known the way of righteousness, than, after they have known it, to turn from the holy commandment delivered to them.  But it is happened to them according to the true proverb, the dog is turned (returned) to his own vomit again; and the sow that was washed to her wallowing in the mire (2 Peter 2:20-22).

Despite their profession of salvation, they have become entangled in the world and overcome by it.  The Apostle Peter revealed the result of one who has become as a puppet Christian, no longer in control, but allowing others to be influenced and help peddle their ungodly ways.

Where is the godly leadership to encourage one to abstain from the ungodly influences that are being promoted?  Jesus in speaking a parable, said: Can the blind lead the blind?  Shall they not both fall into the ditch? The disciple is not above his master (teacher): but every one that is perfect (trained) shall be as his master (teacher).

You hypocrite, cast out first the beam out of your own eye, and then shall you see clearly to pull out the mote that is in your brother's eye (Luke 6:39-42). Who is in leadership today; how can one lead when a plank is in one's own eye?

Who Is at the Helm

Who is at the helm?  Does one view good moral programming or does it promote the very thing God's Word condemns?  Does one continue to listen to profanity, view immoral behavior; unable to rid oneself of its influence, thus becoming a Puppet Christian controlled and in bondage of another?

How can God bless a people, or a nation, that is not in obedience to His Word?  Moses was not allowed to enter into the Promised Land because of one act of disobedience.  God no longer blessed Israel because of one man's disobedience but after the sin was dealt with God's blessings begin to flow again!

Many nations, and individuals, are being ruled by puppeteers; pulling the strings, allowing immorality to flood the land, with many becoming as a Puppet Christian; rather than being in opposition to ungodly influences contrary to the Word of God!

Partaking of the Same

There are many ungodly issues being proclaimed with consumption taking place. There are many who cannot speak out concerning certain issues because they are partaking of the same.  Scripture reveals: You therefore which teach another, teach not yourself: You that preach that a man should not steal, do you steal? You that say a man should not commit adultery, do you commit adultery? You that abhors idols, do you commit sacrilege? You that make boast of the law, through breaking the law dishonor not God (Romans 2:21-23)?

We live in a land of plenty because this nation was conceived in God but we are now seeing ungodly influences bring devastating results. Lifestyles, before unmentionable, are now openly proclaimed. Traditional Christianity is being replaced by the liberalism of the world. A cancel and submissive type culture is now outweighing Christian values; bringing many into a puppet Christian status.

World an Influence
to the Church

Why is it that the world has become an influence to the church rather than the church to the world?  Has this not prompted many Christians to flow with the wind of change establishing a puppet Christian status?

Scripture reveals: Beware of false prophets (puppeteers), which come to you in sheep's clothing, but inwardly they are ravening wolves.  You shall know them by their fruits.  Do men gather grapes of thorns, or figs of thistles?  Even so every good tree brings forth good fruit; but a corrupt tree brings forth evil (bad) fruit.

A good tree cannot bring forth evil (bad) fruit, neither can a corrupt tree bring forth good fruit (Matthew 7:15-18).  Wherefore by their fruits you shall know them (Matthew 7:20). A Spirit-filled Christian need not fall into the mold of a puppet Christian status as long as they listen to the leadership of God's Spirit, and adhere to the Unadulterated (Pure) Word of God!