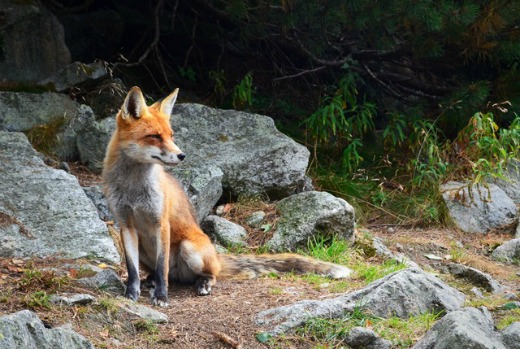 The little foxes are alluded to in God's Word; as well as the cunning of the fox.  In one place Jesus called King Herod "that fox!"  The significance of the title of this message is revealed in a modern day setting.

The Hebrew name for the fox is derived from its digging or tunneling under the ground.  The Syrian fox, the only species indigenous to Palestine, is noted as being clever in its habits, destructive to vineyards,  the plunderer of ripe grapes.

The Little Foxes
Drifting into Worldliness

It was noted that the church is drifting into worldliness, in one way or another, because of fostered pride and love of pleasure.  The writer revealed that those who have been responsible for the church have not been watchful enough; allowing the little foxes  to creep into the vineyard, who having become so numerous and big, cannot be driven out by ordinary methods, for they well-nigh have possession of the vineyard.

The little foxes narrative readily fits into many categories; even those outside the religious realm.  There is little confidence in the political realm as we are seeing a lack of integrity among many.  The mainstream and social media is attempting to deceive, in order to line up with its own bias views, no longer being unbiased in their reporting with substantiated factual information.

We are seeing many persons of fame using that fame to promote political or personal agenda.  We see individuals who are jumping on the bandwagon of acceptance towards ungodly agenda; without examining what is being presented.

The little foxes concept brings out that they are deceitful and crafty. The prophet Ezekiel, said: Thus saith the Lord God, Woe to the foolish prophets, that follow their own spirit, and have seen nothing (no vision)!  O Israel, your prophets are like the foxes in the deserts (Ezekiel 13:3-4).

It was noted that the false prophets were like workmen who try to cover a severely cracked wall with whitewash (deception).  Scripture reveals: So will I break down the wall that you have daubed (plastered) with untempered mortar, and bring it down to the ground, so that the foundation thereof shall fall, and you shall be consumed in the midst thereof: and you know that I am the Lord.

Thus will I accomplish my wrath upon the wall, and upon them that have daubed (plastered) it with untempered mortar, and will say to you, the wall is no more, neither they that daubed (plastered) it (Ezekiel 13:14-15).  We are seeing the crumbling through a deceitful spirit; pursuing a destiny that has been whitewashed by a spirit of deception!

Scripture reveals: The joy of our heart is ceased; our dance is turned into mourning.  The crown (crown of our head) is fallen: woe to us, that we have sinned!  For this our heart is faint; for these things our eyes are dim. Because the mountain of Zion, which is desolate, the foxes walk upon it. (Lamentations 5:15-18).  Because of this desolation, or lost of its previous inhabitants, the foxes could readily walk upon it with no restraint.

We are seeing such in our modern day culture with the Word of God being ignored; and ungodliness rising because of it.  The little foxes are invading a vineyard of opportunity; with little restrain to hold them back!  The prophet pleaded with God to do that which was necessary so that the hearts of His people would be turned back to Him in godly sorrow and full repentance; that which is needed in many nations today!

Jesus warned His disciples of persecution:  Behold, I send you forth as sheep in the midst of wolves: be you therefore wise as serpents, and harmless (innocent) as doves (Matthew 10:16).  Jesus knew that after His departure, to be with His Father in Heaven, His disciples commission would be enlarged.  They would be facing those He referred to as wolves who would be fierce, cruel and hurtful!

Jesus had instructed His disciples to be wise as serpents; noted for having a sharp sighted view towards their own preservation, and in the Near East regarded as the wisest of beasts. They were to maintain their innocence; to be harmless as doves, without malice, wrath, not seeking revenge, but meek and humble in their deportment.

Such instructive words could readily be applied to Christianity today. Scripture reveals: The servant of the Lord must not strive (quarrel); but be gentle to all men, apt (able) to teach, patient, in meekness instructing (correcting) those that oppose themselves (are in opposition); if God peradventure will give them repentance to (that they may know) acknowledging of the truth (2 Timothy 2:24-24).

The prophet Jeremiah turns to God concerning the mountain of Zion, that had become so readily accessible to the fox, and uninhabited by God's people, saying:  Turn you us to you, O Lord, and we shall be turned; renew our days as of old (Lamentations 5:21).  Jeremiah pleads with God to do that work that the hearts of His people be turned back to Him. Such is needed today with the application of this appeal in God's Word:

If my people, which are called by my name, shall humble themselves, and pray, and seek my face, and turn from their wicked ways; then will I hear from heaven, and will forgive their sin, and will heal their land (2 Chronicles 7:14).

While this promise was originally given to King Solomon regarding the people of Israel, it is applicable to all who will call on the Lord in repentance and faith.  This verse clearly expresses God's willingness to hear the prayers of a repentant people.